Most people are familiar with the archeological site of Pompeii, but fewer know about Herculaneum, another city devastated by the infamous explosion of Mount Vesuvius in A.D. 79.

Herculaneum was a wealthier city than Pompeii as demonstrated by mosaics and colored marble. I guess there’s a belief that Pompeii was also a town full of prostitutes? I don’t know; explore that theory on your own time. The Pompeii site, from what I’ve heard, is MUCH bigger than Herculaneum, but the city of Herculaneum (located closer to Vesuvius than Pompeii) was covered in volcanic water, ash, and debris, and experienced a much greater state of preservation for the 1600 years it was buried. The first thing I noticed about the site (aside from how well preserved it was) was how deep it had been buried. 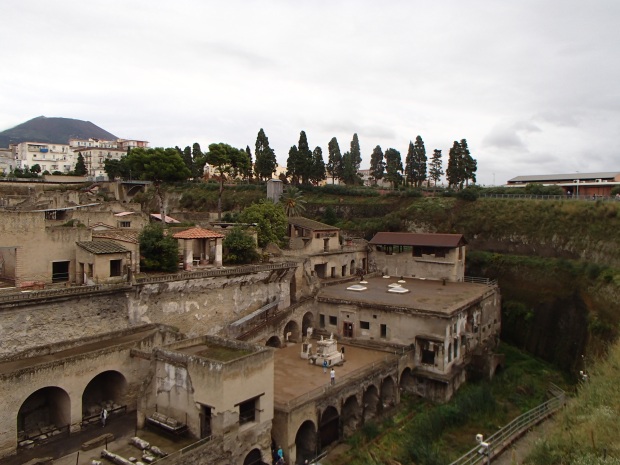 The tops of the buildings just reach the height of today’s landscape. It was truly mind blowing to wander around the site and see completed, immaculate mosaics on the floors of some of the homes or paintings on the walls that retained their original colors. We continued around the site for two hours before ending at the boathouses (six can be seen on the bottom right of the above picture near the grassy area).

At the time, Steve and I didn’t realize the little alcoves we were seeing were boathouses (we had to look it up later), but we definitely understood that inside the stone arches were skeletons; many, many skeletons.

The people of Herculaneum had clearly sought refuge in this place, but hadn’t found it. I read that the 1981 excavations of the site revealed more than 55 skeletons on the beach (in AD 79, the beach was right next to the city, which is not the case anymore) in the first six boathouses. Earlier excavations had uncovered only a few skeletons, so it was assumed nearly all of the inhabitants had made it out of the city before the volcanic eruption. This was clearly not the case; as the last citizens of Herculaneum waited for rescue by boat, they were killed instantly by heat; the temperature when they died was over 900°F. Later excavations revealed at least 300 skeletons huddled together in 12 boat chambers. It was very eerie to notice that most of the skeletons were smaller—most definitely women and children.

We asked one of the site staff if they were going to continue excavating, since you could tell there was more to the city. She confirmed that only 30% of Herculaneum has been uncovered! What?! Why wouldn’t you keep digging? Well, the modern city of Ercolano is directly above the site. Huge bummer! Maybe someday they’ll figure out a way to uncover the full site, but until then I’m going to speculate that there are definitely skeletons of aliens, unicorns, and/or dragons in there.

Herculaneum in the foreground, the modern city of Ercolano above/behind it, and farther back, the ominous looking Mt. Vesuvius shrouded in cloud cover.