Again, I’m behind so these events took place during May 3rd-5th.

On May 3rd Steve and drove for 3 hours to Sobaeksan National Park where we thought we would climb to the 3rd highest peak in Korea.  The 3rd tallest peak, named Birobong, is 1,439 meters above sea level.  And if you look at the Korea National Park website and see how difficult they tell you the hike is it says, “A bit of slope.  Difficulty is low.”  So Steve and I thought that yeah, it might be a little tiring, but it will be a good, fun, different workout. WRONG.  There were points during our climb where I thought I was going to A) slip, fall, and die. B) pass out from exhaustion.  It took us 2.5 hours to get to the top and another 1.5 hours to get back down.  The worst part was that once you were at the top you realized that you had to go down.  And in some ways going down is worse and more dangerous because you have to fight gravity the whole way and watch your step so you don’t slip on a boulder.  It was one of the most mentally and physically challenging things I’ve ever done, hands down.  By the end I thought my legs might give out, but I did it!  And I do feel great that I made it to the top! 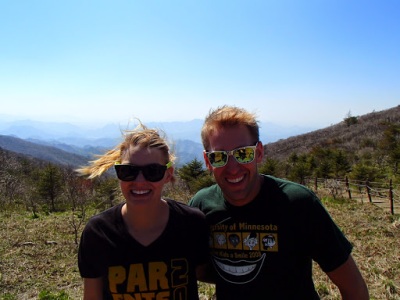 On May 4th I headed to Seoul since I didn’t have to work on Monday, May 5th (Children’s Day) and Tuesday, May 6th (Buddha’s Birthday) and checked into probably one of the worst hostels in Korea.  It was tiny and the shared bathrooms were also tiny and SO TERRIBLY dirty and smelly!  So I was stuck there for 2 nights, but I guess it forced me to be in the room as little as possible.

On Sunday after I dropped my backpack off at the hostel, I went to the Myeong-dong shopping area.  I went to the stores with American sizes first (H & M, Forever 21) and then went into the Korean stores where it’s much more difficult to find clothes that fit correctly.  I wasn’t in a hurry though so it was fun to see the different, small boutiques and their styles.  One thing I appreciate about Korea is that it’s not ALL chains.  They have a lot of “ma and pa” shops that are run by small business owners.

The next day I was ambitious and decided to wake up early and head to Bukhansan National Park which is just 45 minutes north of Seoul and accessible by train.  It was extremely busy (due to its accessibility) and I was soon overcome by brightly dressed 40-50 year old Korean hikers. 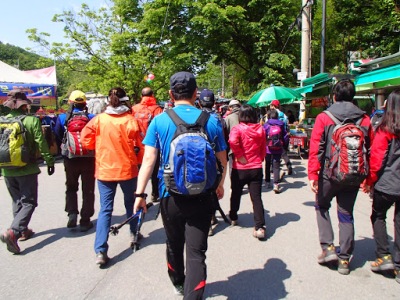 I was thinking “Well, this hike should be easy because it’s NOT the third highest peak in the country so it will be a piece of cake”.  The tallest peak was half the height of Birobong so I had high hopes of being able to do it without much physical exertion (keep in mind two days before I had hiked up the 1400m mountain).  I even spoke to a nice Korean park ranger who spoke English with a French accent.  He asked what kind of trail I was looking for and I told him “nice, slow, gentle slope” and he pointed me in the right direction.  I’m not sure what his idea of a “nice, slow, gentle slope” is, but it is definitely not the same as mine.  The trail I was on began slow enough with many hikers around me (and many 50 year olds flying past me with their hiking poles).  Then when I was just getting out of breath I realized I’d been hiking for 1 hour already and was nowhere near the top.  So I kept going and then once I reached the easiest peak Uiam (it means cow ear in Korean) I crossed over (just as the ranger had told me) to continue on to the highest peak, Juanbong.  That was my biggest mistake.  As I continued on the path it became rapidly more rocky.  There were points where I was pretty sure I was going to die.  That’s because at some points what I was doing should have been considered rock climbing as I was using my hands, feet, and entire body to climb up and over rocks to reach the path that kept going up and up and up.  Keep in mind at this point I was close to tears I was so scared of slipping and dying.  Also keep in mind the 50 year olds were STILL flying past me like it wasn’t a big deal to go rock climbing. 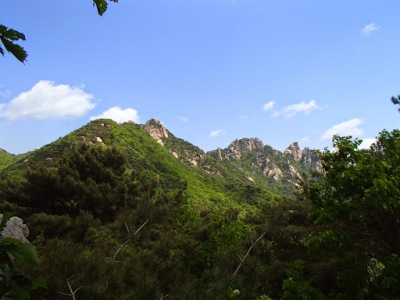 I didn’t realize it at the time I took this picture, but you can see that VERY pointy-looking, exposed rock at the top of the mountain…that’s where I would eventually end up.
I finally reached the top and patiently waited my turn to take a picture (and also to catch my breath and try to keep from throwing up from fear).  A very nice old man and his wife took my picture for me.  Can you tell how cold and terrified I am?  That’s not a smile…it’s clenching my teeth… 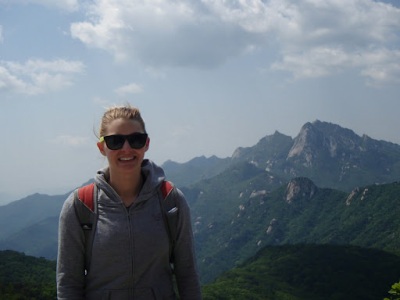 BUT I survived and I have definitely had my fill of “hiking” (aka rock climbing) for the time being.